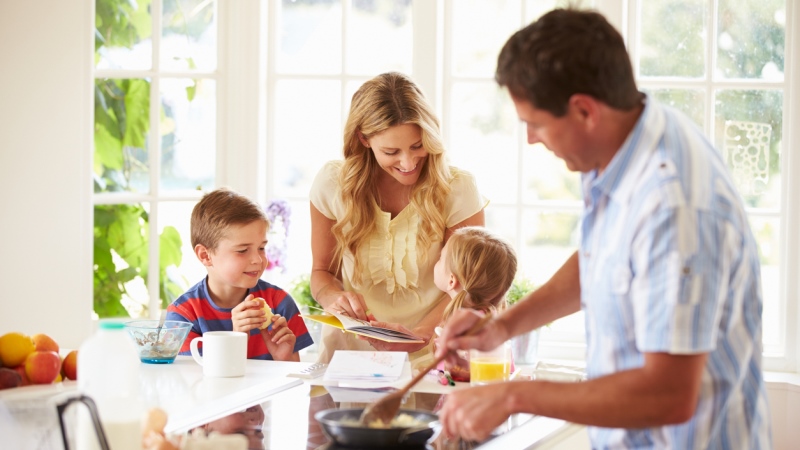 If you’re like most parents, the peaceful moment after getting your kids on the school bus is your favorite time of the day. Fighting and tantrums regarding unfinished homework, breakfast choices and that ugly purple shirt can get the day off to bad start for all involved. Fear not, a peaceful morning is just a few hacks away.

1. Wake Up 30 Minutes Before Your Kids

Parents like to sleep late. We day dream about the days before kids when we could sleep as late as we want without having to wake to coordinate backpacks and referee arguments. Still, waking up at the same time as the kids will only create more confusion and chaos. When you’re awake before the kids you can take some time to have a cup of coffee and prepare for the impending chaos. Parents who wake early get to take their time in the bathroom without rushing and prepare for the morning already having shaken away the morning cobwebs. This puts them in a better mood when the kids wake and keeps the crankiness at bay.

2. Do Homework After School

There’s only one way to avoid the morning homework fight – make sure it’s done the day before. Many parents prefer having their children do their homework first thing off the school bus. Leaving homework until the last minute means it’s done in a hasty manner, it also means your children’s attention is spent concentrating on getting the task done rather than doing it to the best of their ability.

3. Pick Out Clothes the Night Before

If your kids take too much time choosing the day’s outfit or if they don’t like the clothes you choose for them, have them decide the night before. Don’t wait for the last minute, the last thing you want is for wardrobe consideration to cut into bed time. Making it a part of the evening routine will save a considerable amount of time in the morning. This will also give parents enough time to mend or iron clothes that are in need of an adjustment.

4. Have Kids Plan Out the Breakfast Menu Ahead of Time

Picky kids aren’t as high maintenance when they’re allowed to make the decisions. Let them plan the breakfast menu over the weekend. If you have more than one child, they can take turns picking for different days. Find items that will appeal to everyone and inform all there’s no going back. Now, this may not always prevent a meal time meltdown, but generally if kids have a say in the planning and preparation of food, they’re more likely to eat without a hassle.

5. Make Lunch the Night Before

Making lunches the night before leaves one less thing to do in the morning. Make it part of your after dinner routine, like doing the dishes. Parents with more than one kid can have everyone help in assembly line fashion. Older kids can even make their own lunches. One less thing out of the way at night means one less item to worry about in the morning. Put lunches and snacks in lunchboxes and bags and put them in the refrigerator over night.

If kid are taking too long, set a timer. If they don’t finish breakfast, remove it from the table. If they’re taking too long in the bathroom, tell them their time is up- even if their hair isn’t brushed. If they’re not fully dressed tell them they have to go to school in their pajamas (they won’t but it’s a good threat). You get the picture. After a day or two they’ll get the message.

If kids get through the morning ritual without incident, offer a reward. Rewards don’t have to be serious prizes either. Try awarding privileges such as having control of the remote the whole night, extra video game time, later weekend bed time or being able to pick out a movie . Stickers and dollar store items also make nice rewards.On another note kids who dawdle or give you a hard time can find themselves facing a loss of privileges such as no television or dessert.

If you want your children to get ready for school in a timely manner, don’t let them procrastinate in front of the television. Having the TV on, even in the background, ensures at least one child will be standing in front of the tube ignoring breakfast and everything else around him.

Bathroom problem? Too many kids and not enough johns? You need a bathroom schedule. Allot each child a certain amount of time, for instance five to seven minutes for young children, 15 to 20 minutes for teens. This helps to eliminate the morning bathroom line, and also, it keeps kids separate and out of each others’ hair.

If you’re getting stressed because the kids are yelling, or the kids are yelling because they’re getting stressed, someone needs a time out. Leave the room. Count to ten. Count to twenty if you have to. Walk away, take a deep breath and come back after you’ve calmed down a bit. If one of the kids need a time out, do that too. Start up again when things are calm.